If you’re expecting the 2020 Chevrolet Silverado Custom Trail Boss to be GM’s answer to Ford’s Raptor, prepare to be disappointed. The Raptor is a truly astounding machine, engineered from the ground-up to be a proper race truck. The Trail Boss, on the other hand, is not.

What the Trail Boss is, is a base-model Silverado with some off-road bits thrown at it. Said bits are decent, though, and include a two-inch suspension lift, Rancho shocks, a locking rear diff, skid plates, and 18-inch wheels wrapped in some knobby Goodyear Duratrac off-road tires.

It also gets what could best be called the “macho appearance package,” where it’s massively massive front grille gets the black-out treatment, as does the lower front bumper. Red tow hooks up front let you know that this truck means business, as do the ‘Trail Boss” decals on the bedsides. And because it’s a performance truck, it gets fake exhaust cutouts in the rear bumper.

And when sprayed in “get-out-of-my-way” red, the Silverado Custom Trail Boss is the perfect chariot for armchair MMA enthusiasts who habitually share their excessively strong opinions about sports. But for the rest of us, well, this truck is a mixed bag.

As a design exercise, I genuinely like this Silverado Trail Boss. It’s a mix of crisp line work and thoughtful detail, and thanks to that blackout trim, it doesn’t feel as overwrought as the rest of the Silverado lineup. Details like the flying buttresses nestled in the front fenders keep things feeling interesting, and bring a modern frame to the heritage-inspired headlights.

And to me, it’s this combination of size and “Trail Boss” braggadocio that makes this Chevy a failure in practice. I’m sure you’ve read over and over how trucks this size are useless in the city, where I live. That remains true. But full-size, crew-cab, long-bed pickup trucks like the Trail Boss are useless on the trail as well.

The Trail Boss – or, hell, any Silverado – is wider than most popular OHV trails. Sure, it can take on fire roads and the like, but when, say, you come across a dirt bike headed in the opposite direction, the only way you can pass is by forcing said biker off the road. And rock crawling? In a full-size pickup? C’mon…

Ford’s Raptor can get away with its size as it positions itself as a factory-built Baja truck, designed to run across wide-open terrain. Its suspension is soft, with lots of travel, so you can gun it over dirt, rocks, buildings, whatever… and it just floats across in comfort. The Trail Boss, on the other hand, abides by the thought that stiffer is better. So when you point it at a train crossing, each road joint sends shockwaves through the cabin.

And it’s not like the cabin itself is bathed in luxury. As mentioned at the top of the article, outside of the off-road bits, this is a base-level truck. So it gets base-level things like a front bench seat, a column-mounted gear-select lever, and lots and lots of hard plastic surfaces. But those who buy a truck for legit off-road duties don’t buy the fully loaded one. They know that the interior will get dirty, and that durable surfaces are preferable to those that disintegrate the second they get dusty. And when viewed through this lens, the Silverado Trail Boss starts to make a lot more sense.

Strip away the off-road bits and you’ll find a truck that’s durable as hell. It’s got a 6.2-liter V8 that’s good for 420 horsepower and 460 lb-ft of torque. And that engine is of the famed LT series, so you know it will outlive your grandchildren. I don’t know yet if the Trail Boss’ 10-speed automatic transmission has the durability of a classic Powerglide, but given the truck’s ability to tow up to 13,500 lbs, I’m sure it’s at least stronger than whatever is in your WRX.

But for me, everything about this truck comes back to its size, and this is just too much truck for me – or anyone – who lives in a city. This truck is too rough around the edges for urban driving, and it’s too big and cumbersome to claim any overlanding off-road cred.

If you need a full-size truck that can do off-road stuff: get the Raptor. If you need a full-size truck for actual work duties, and you want to stay in the GM family, then sure, get a Silverado, but go for one built for comfort. And for me, I was going to end things saying that the Colorado is more my speed, but let’s be honest: if I were going to get an off-roader, it would be a Jimny.

So maybe you can just disregard everything I just said. 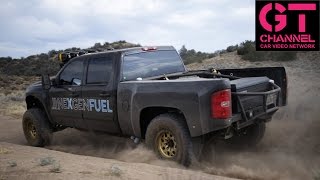