Subscribe to the Official Global Rallcross here! http://bit.ly/11JHk58 Defending GRC champion Tanner Foust is just one of many drivers to bring a brand new car to the track this season, and it packs a punch like nobody's business. His Ford Fiesta ST produces 600 horsepower out of a 2.0-liter engine and goes from 0 to 60 in just under two seconds. Of course, we couldn't pass up the opportunity to have Tanner show off the new ride during last week's press tour at Bristol and Atlanta Motor Speedway, and he couldn't pass on the opportunity to drive it. Here's some of our best footage of one of GRC's biggest stars demonstrating just what these Supercars can do. Video Produced by Yaer Productions 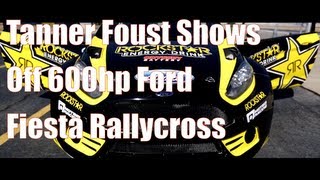