Subscribe to GTChannel: http://bit.ly/K8F2fa and get our new mobile app! http://gtchannel.com/gtchannel-mobile... When Sung Kang (Fast and Furious) and his friends bought a 1973 Datsun 240Z, they turned to GReddy to restore and modify this Japanese classic. The Fugu Z was revealed a week before the SEMA Show at GReddy's US headquarters in Irvine, CA. The Fugu Z was a smashing hit at the SEMA Show and won Best of Show from the prestigious Gran Turismo Awards guaranteeing a spot in the Sony Playstation game. This build is also documented on the Speed Channel YouTube Channel as the "Dream Z" series shot by our friends at eGarage. GTChannel got to interview Sung and GReddy USA president Kenji Sumino before the SEMA Show in Irvine. Music "It's Just The Beginning" by Jason Dutton - https://www.youtube.com/watch?v=qVRvp7lJiho "Sundown" by Sean Mackey - https://www.youtube.com/watch?v=Zj6GFzHWKWA -------------- If you create car videos, join the GTChannel network here: http://www.gtchannel.com/partner http://www.gtchannel.com Like us on FB: http://www.facebook.com/gtchannel Send us video ideas on Twitter: https://twitter.com/GTChannel Instagram: http://instagram.com/gtchannel/ 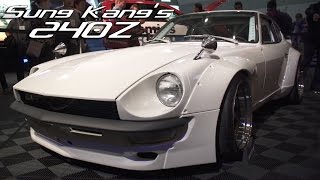